About Minnesota Bugs and Bears

With just a little thought and early preparation, they’re really no big deal.

BLACKFLIES: If you have been lucky enough to enjoy the north country’s prime fishing period of Memorial Day to the third week of June, you probably ran into these tiny little pests. Much like a mid-western “chigger,” they make a small nip to pool a droplet of blood. They tend to bite where they find the most protection from being brushed off: top of your socks, around the collar or sleeve edge of your shirt, around your ears, and the hair-line on the back of your neck. They are attracted most to dark colors (blue!), and are drawn to body heat in the early morning and after dinner.

The best repellents are Ultrathon by 3M and Bug Stop. Wear light colors, tuck your pants into the top of your socks, and tie a bandana around your neck.

MOSQUITOES: These miniature vampires are most often experienced from mid-June to the later part of July. If you have no repellent, and get out on a still evening or a long damp portage during this period, they can be awful. On the other hand, they are very easy to repel.

We have found most name-brand repellents work well. You need some amount of DEET in the formula, but 25-40% is plenty. More than that percentage often produces headache and nausea in some people. We suggest the following forms in our order of preference: stick, roll-on, pump spray, aerosol spray, and lastly, lotion.

MAYFLIES: These fellows have no direct impact on paddlers. They can, however, have a very big impact on fishermen … especially those hunting smallmouth bass. Actually it is the nymph stage, or “hatch” that is the biggest concern. Over the one week (+) period when they grow towards their adult stage, the bass slurp these critters by the gut-full. Fishing can get really tough.

The easiest solution is to switch to walleye or northern pike. They both feed on them also, but to a much lesser extent. 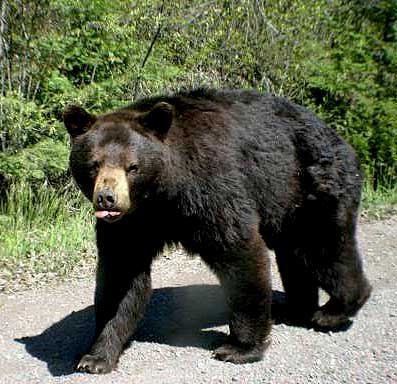 We would venture a guess that we hear a question about bears from about 99% of our parties. It’s not that our paddlers have a fear of bears, it’s more likely that there are so many conflicting stories that it is hard to know what is the right thing to do.

Bears have a lumbering gait, walking on the entire foot as humans do. Their short tails are almost concealed in long course fur. Adult bears measure 2-3 feet high at the shoulders when standing on all fours. They range in color from glossy black to dull brown, with a brown snout. Weight is often 250-300 pounds. Their dietary habits are truly omnivorous: they can eat anything! Although much of their food is plants and berries (especially blueberries), they also eat ants, grubs, mice, and carrion. They can be a real nuisance around beehives, outfitting bases, and campsites in heavy use areas.

The black bears we have in the north country are not aggressively dangerous. Their behavior differs from grizzly and polar bears which should be avoided at all cost. But even with these bigger, more aggressive bears, actual attacks on humans are very rare. In the United States there are more people hurt by buffalo each year than by bears (how many buffalo attacks do you read about?)

In the 80+ years that the Quetico – Superior has been an entity, there have been only three people hurt by bears. The first two cases involved the same bear. Due to it having ingested plastic from a food pack, it could not digest anything. It was starving. The situation was totally a freak happening. The result was several stitches, and a couple of severe bruises. Several years later, the third incident involved an individual that didn’t like the fact that a bear was dragging off his food pack from a portage. He chased the bear, but just as he got close, tripped and fell down. The bear spun around and swatted him with a huge paw. The scratches didn’t need medical treatment.

One summer we had a very dry canoeing season. Blueberry and raspberry patches were a total bust … grubs under logs were nonexistent. The result: bears were forced to become bolder. We battled two solitary males, and a mom with two cubs, from late July into September. A couple of nights each week they nosed through garbage cans. They tore a 3/4″ thick sheet of plywood which was the cover on our trash trailer. Next they tore through the door of our fish cleaning room. As the summer wore on, they started showing up in the afternoon. At this point we turned from yelling and waiving to throwing rocks and chasing. That usually solved the problem here at the base.

Out on the canoes trails, paddlers should follow the same routine: show the bear who’s the boss. Be firm but not threatening. If the bear is actually frightened, it will climb a tree. Then you are stuck with it up there for hours. If mom perceives a threat to her kids, it will be you that will do the running … not her! That’s just what nature has taught her to do.

The most important thing to do is not have bears around in the first place. Avoid camping on the “canoe highways” such as the Moose Lake Chain, Ensign Lake, and Basswood Lake in the BWCA, and on North Bay in Quetico Park. Keep your campsite clean, and never take food into your tent for any reason. Be sure to hang your food pack at night! This helps for chipmunk and mice problems, too.

If the worst happens, and a bear tears into your pack, it would be covered by our equipment protection option … if you elected to take it. (Otherwise, used packs run from $60 to $100 to replace.)